Big as your Head 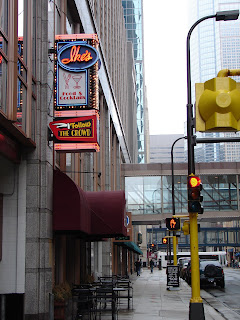 Judy and I were first to arrive at Ike's this weekend. We told them six people were coming, and they ushered us to a secluded booth underneath posters of Rat Pack members (Frank Sinatra and one of those other guys). Almost before we had positioned ourselves in the booth, and before we had even explored the menus, our charming, Southern waitress delivered a caramel roll as big as our head to the table. It was stuck with 6 forks, just waiting for us and our tardy friends to dig in. We didn't order the pastry. It just comes with brunch.

You should know something about Breakfast Club. We love food. We're food snobs, and we like to eat. But we've also lost a combined weight of over 150 pounds in the past three years (and not in an unhealthy way, mind you. We've continued to eat. We're just more sensible than we used to be.) I must say that the caramel roll as big as your head would have been more in Ike's favor about four years ago. Nowadays, it just looks like fat to us. It doesn't help that it comes with a giant pat of butter on top.

Still. Still. I like to think that if an unrequested, but fabulous pastry arrived, even if it were as big as your head, and even if we were all a little more health conscious than we were four years ago, we'd be nothing but grateful. The thing is, it wasn't fabulous. It was just big, sweet, over-brown, and covered in good butter.

It made me think of landing in Chicago, after spending two weeks in Japan. In Japan, when you're between trains at a train station, you can buy a perfect little triangle of rice and fish wrapped in seaweed. There's an ingenious unwrapping of plastic that goes with this triangle of rice. Not until you unwrap it does the seaweed touch the rice. This prevents it from getting all soggy and nasty. So we landed in Chicago, a little bit hungry from our long flight, and the smell of Cinnabon in the airport just about knocked us over. It didn't smell good, because Cinnabon is crap, but even so, it sort of made me want to eat something fat and buttery. I looked around the airport and all I could see were fat people, and then I realized that before the smell, what I really wanted was a triangle of rice. Unfortunately, in this country, it's a lot easier to make bad choices about what we're going to eat than good ones.

One of those bad choices is eating the not-so-very-good cinnamon roll that they deliver to your table at Ike's before you've even had coffee or a chance to think about what you really want to eat. I'm not going to tell you to skip it, because I know you won't, and it's not a bad cinnamon roll. I'm just saying I wish I had skipped it.

Meanwhile, our pleasant, Southern waitress explained how Ike's works. You order your eggs (the usual ways or as eggs Benedict or in a breakfast quesadilla or you can choose to stand up and visit the omelet bar. Yeah. Right.), and then they deliver a family sized tray of meat and potatoes and pancakes to go with them. They will refill the meat and potatoes and pancake until you can take no more. See what I'm saying about bad choices? The whole thing, with the giant roll, is $14.99. It's also the only thing you can have at brunch time, so forget about opting for the burger instead.

I wasn't impressed with my Benedict (but I made that bad choice on my own). The crowd generally liked the potatoes while at the same time noticing that they weren't crispy enough. They were fried with onions and tasted fresh. The bacon and sausage were tasty. They struck me as a bit mass-produced, but this may have been just because I saw the dude frying mass quantities of meat as we walked in the door. I also worried about how many pounds of meat they throw away each day because of the all-you-can-eat thing, but I guess sometimes I have to shut off my brain so I can have a good time.

OK, so I guess what I'm saying is that Ike's is fine if you can take that sort of thing. There are lots of better choices in Minneapolis though, so I don't think I'll go there again, despite totally loving the booth and our waitress who kept the cream and sugar coming for our coffee.
Posted by Alex at 1:57 PM

Yeah. I mean it's not like I pay for Breakfast Club, but if I did, I'd definitely prefer people ordered what they wanted to eat, since we're not big enough people to want to eat $15 worth of breakfast. It might be different if I were eating with some 300 pound man, but I still wouldn't want to watch my 300 pound friend eat that entire caramel roll.

Alas I was so focused on consuming as much bacon and sausage as humanly possible, I neglected to take a picture of the cinnamon roll. That would have made a nice addition to the post.

I didn't eat again until 8 pm on Saturday and I wasn't even all that hungry.

What Ike's lacks in quality, they make up for in quantity.

Just for the record, you can get those rice triangles at United Noodle, but they're frozen and I'm not sure how that works out. The wrapper technology is still impressive, at any rate.