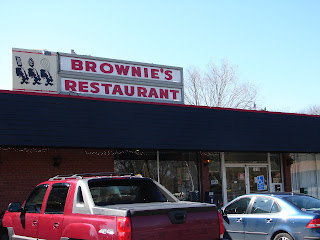 We ate at Brownie's this morning. It was a typical diner. The waitress was exceedingly nice. Apparently, she hadn't heard the This American Life thing about how mean waitresses get bigger tips. Lucky for us. Also, lucky for her, Jimmy's tips are big no matter how nice you are. The food was diner-y. Judy hated it, and I wouldn't recommend that you make a special trip to discover Brownie's, and if you already live in the neighborhood, I'm sure you have your own opinion, so I won't waste your time.

Instead, this post has to be about something far more disturbing to Twin Cities Breakfast Club members. Did you know that we are living in the midst of a bread crisis? Seriously. All of my life, bread came in a hard loaf wrapped in clear plastic with red and black writing on it. This was Catherine Clark's Brownberry bread. It was the only whole wheat bread we ate after Jimmy and Judy stopped making their own. It was the only kind we liked. I hate to sound whiny, but we've been eating this bread for thirty years, and now, poof, it's gone. There is no more Catherine Clark's.

I'm a single person who can't make it through a loaf of bread by myself, so I haven't bought bread in months, which is why I only found out about this crisis today at breakfast club. Actually, the first whispers of it were before breakfast, when I saw one of the old ladies at my parents' house carrying a piece of bread to the toaster. "How's the bread, Ann?" asked my mom in the kind of voice you use when you ask how someone is holding up at a funeral. "Not so good," said Ann in a defeated voice, "but I'm going to try it toasted." Odd, I thought.

I got the whole shocking news at breakfast, when Rachael informed us that she and Beau had even written to the company to complain about the new bread, and all they got was a letter thanking them for their feedback and some coupons for the new, bad bread. "What?!" I said, "There's no more bread? But there used to be so much of it..." Yes, friends, you can eat the same product faithfully for three decades but when corporate America decides not to make it any more, it's just too bad for you. No more bread.

I lived in Portland for two and a half years. I couldn't find real bread there either. It made me not want to eat BLT's. It made me lose interest in French toast. It was a sad time. I tried other breads. Many other breads. None of them were as good as good old Catherine Clark's. They lacked the density and the ever-so-slight sweetness of the real thing.

Remember when we were kids and for some reason we had to put bread bags over our socks before we could put on our boots? The bread bags I used were clear plastic with red and black writing on them. Whatever will my children (should I ever have them) use? The bread bag of some inferior wheat bread? This is so wrong. Why, oh why, didn't I fill my freezer with bread before this whole crisis began? Maybe if I'd bought more bread this never would have happened.
Posted by Alex at 3:10 PM

I cannot believe that Brownberry is now crap. I feel like a part of my childhood has been stolen. I've been eating their bread for 25 years!

Please, does anyone know of a decent wheat bread to replace Brownberry? Anyone!?

Beau called me the other day with an update. Apparently, Brownberry heard the complaints of a multitude of good bread fans (or maybe just Beau and Rachael), because they recently wrote to Beau and Rachael with the good news that the old Catherine Clark's would return to the shelves in early June. Phew. The Bread Crisis of Ought Seven draws to a close.

I moved away from Minneapolis years ago but always stock up on Catherine Clarks Brownberry Bread when I'm home to visit. I was horrified when I brought back the mush they tried to replace it with (although still better than any brand-name bread I can find in NYC). I was happy to find they had brought back the original recipe when I was home this past October and again over Christmas. I nabbed 4 loafs to put in the freezer for the holidays. Mmmm.

I totally agree, my husband is looking for the Appleberry bread from Brownberry. Anyone seen it?