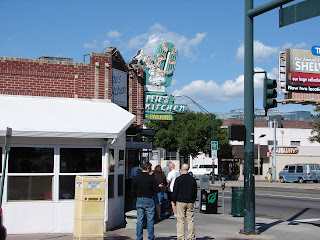 So here I am, alone in a wonderful city that happens to have an embarrassment of riches in the breakfast department. Do I sit all by myself and wallow in loneliness, never enjoying weekend breakfast because I am without my club members? Well, yeah, sometimes. But not all the time. Sometimes I go out and experience my new city, and I've even begun recruiting new members into the Western Chapter of TCBC. Rejoice in the new city!

After my first experience of breakfast in Denver, I decided the only prudent thing to do was to try a breakfast burrito in as many restaurants in Denver as is humanly possible over a two year span (you know, in case Fern decides to visit me). I was able to convince one of my new classmates, Cathy, to join me in the fun. Two people does not a breakfast club make, but it's a start and it is WAY better than the lonely, sad guy eating breakfast at the counter by himself.

We met up at Pete's Kitchen on Saturday morning. Pete's Kitchen is your prototypical diner. Small, lots of tables crammed together, and line out the door. I was worried as I waited for Cathy to arrive that we wouldn't be able to eat EVER. I was also a little disgruntled when I was informed that I would not be seated until my entire party had arrived. I relaxed a little when I saw the reason for this policy, a ridiculously fast turnaround. Pete's has the service thing down to a science. There was no lingering at the table over a cup of coffee. No, you sit down, you order food, you eat, and then you leave. Period, end of story. They are a finely tuned machine.

When Cathy finally arrived (late because of a biking wrong turn), we were able to get a table immediately, and on the patio no less. I ordered the breakfast burrito and Cathy the hunter's breakfast. I was extremely excited for my burrito because it contained, bacon, ham, chorizo, AND gyro meat. I was ready to experience some sort of meat nirvana. While it was very good and filling, I realized that it is possible to have too much meat in you breakfast burrito. I barely even tasted the gyro meat as it was overwhelmed by the other meats, especially the chorizo. It was good and ginormous however. I didn't eat for the rest of the day.

Cathy ordered the Hunter's Breakfast. It looked like the perfect meal to eat right before one went out into the woods and sat in a cold deer blind for the next 13 hours. Not only would it keep you warm all day, but you wouldn't be hungry until the following evening. It contained eggs and meat on top of what appeared to be 9 pounds of hash browns. Despite her valiant efforts, Cathy could not finish her meal.

Overall Pete's Kitchen received a B from both club members. The food was good and plentiful. Pete's was down graded for their Bun-o-matic coffee and a lack of refills on the coffee. They are open 24 hours and I suspect I will come back one night after bar close, I'm sure that is where Pete's Kitchen really shines.
Posted by Amadeus at 10:40 AM

Hooray! Beau's keeping it real in Denver. I felt like I was right there with you with a burrito full of too much meat (and not enough pork fat).

Burrito looked meatnormous to the max. I don't think I'd ever met a mountain of potatoes I couldn't conquer until this day. And that's with an amped up metabolism from the biking! Definitely a drunk time hangout. But the more I think about it, the sadder I get about the sad coffee situation - that much turnover should beget full coffee mugs!