Meanwhile, Back in Minneapolis... 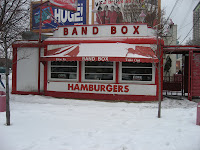 Our crew got a bit of a late start for the Minneapolis version of Breakfast Club today, so we probably ate at exactly the same time as Beau's Denver crew. Judy and I were still out walking the dog at 9:45 when we made the official call to Jimmy to begin the process of getting out the door and meeting for a meal. Judy displayed unusual decisiveness in picking a restaurant, while at the same time describing her choice with such Judy-like obfuscation that it was nearly impossible to tell at which restaurant she so decisively wanted to eat. "You know that place? It's sort of downtown? And it has the small tables? I think it's red. Or maybe the tables are red." Red turned out to be the essential clue. She meant the Band Box. We've eaten at the Band Box several times in the past. In fact, we had a brief love affair with it, because it's such an authentic little diner. I believe there was even a period in our history when we ate at the Band Box twice in the same calendar month, which is a rare compliment indeed.

There's really only one table big enough for us at the Band Box (and it is, in fact, red, as Judy announced with triumph shortly after our arrival). It's not only the largest table there, but the best one, because it's tucked into its own little nook in the restaurant and it has windows on two sides. There was a family sitting there before we arrived, so we stood forlornly next to the second-biggest table, until they offered to switch, which meant moving their two small children, but they did so with such friendly cheerfulness that we didn't even feel too awkward about it. They even offered to take our picture with Rachael's cell phone so she could send it to Denver. They did not accept my invitation to join us for breakfast, but they were still the friendliest next-door table we've ever had.

The waitress was not the friendliest waitress we've ever had. She thoroughly intimidated Perley who was nice enough to ask for water for the table. "Yeah. We're out of glasses," she said tersely. Out of glasses? What? This is way worse than not having milk. When she came back later with two waters, Perley scolded us for not taking them both. Personally, I was just trying to save the precious supply of water glasses.

The wait for food was interminable. In fact, for a period of time, we noticed that not only were we not eating, but everybody else in the place was also waiting for food, and we couldn't even really smell food. We wondered if the cook had had to run to the store while we waited. And waited. This may have been the cause of the waitress's bad mood. All of the other employees must have ditched her and gone to the store, leaving her to placate the masses with just a single pot of coffee (which she slowly rationed out to the tables) and no food or water.

Or maybe she was just having a bad day, because our food did eventually arrive, and it actually had some very bright spots. Rachael declared that Judy's onion rings were the best she's ever had. (Yes, Judy ordered onion rings. Yes, her stomach hurt afterwards. No, we can't blame the Band Box for that, since everyone knows that Judy's stomach can't handle onion rings.) The potatoes were fried with onions so they had good flavor, and they had some crispy bits. I ate my entire plate full of eggs, potatoes, and toast and it was satisfying in a traditional breakfast kind of way. Rachael clearly also enjoyed her breakfast sandwich because she fell into a deep silence which lasted until every last bite was consumed.

Sevice was slow. The food-happiness was definitely uneven, but when it comes to a traditional breakfast, the Band Box is a good solid choice. And the tables are undeniably red.
Posted by Alex at 3:10 PM