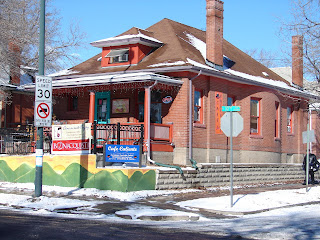 It's a glorious weekend here in Denver. Mostly because I have the privilege of spending it with Rachael. Thanks to the good Dr. King, we were able to make it a four day weekend of togetherness in Denver. It wouldn't be a proper weekend without a Saturday morning meal out, so Rachael and I ventured out for a two-person breakfast club.

Since I am new to the Denver scene, I have do my homework before departure. It isn't practical (is it ever?) to do the "let's drive around aimlessly until we find a place". Maybe after I've lived here for a while. Last night I did my internet research (no citysearch this time dagnabit!) and found a place that had incredible potential. We were destined for DJ's Berkeley Cafe. I was very excited, the food looks fantastic and it was in a totally new to me part of Denver. Two very hungry club member's pulled up in front of DJ's at 9:30. Closed. How could a breakfast place be closed on a Saturday morning at 9:30 am? Well, a very nice sign on the door informed us that on January 13th, a small kitchen fire broke out. Luckily there were no injuries and DJ's is fully insured. They are working feverishly to repair the damage and hope to be open in the near future. While this was encouraging to hear and I am looking forward to returning to DJ's after the repairs are complete, I was not exactly pleased to be walking back to the car, sans breakfast. Now I was hungry, a little grumpy, in a completely unknown part of town, and the clock was ticking towards melt-down time. The day was further complicated by a previously planned obligation of moving assistance at 12. The clock was ticking literally and figuratively.

My love, Rachael, has many quirks. Many that I love and many that I love but also drive me crazy. One of the "love but drive me crazy" quirks, is her affinity for the wild goose chase. On more than one occasion, she will decide that she wants to go to a place. She'll tell me that she doesn't know EXACTLY where it is, but is pretty sure of it's general location. Once this decision is made, we will spend the next 30, 45, 60, 90 minutes driving around somewhat aimlessly with Rachael saying things like:

"Hmmm, this doesn't look right, I think it is to the right"
or
"This looks familiar, I think if we go left for a while we will see it"
or
"Do you remember that one time we went to that clothing store? I think it was by that place"
or
"No, this is wrong, I think we were supposed to turn a few blocks ago"

The success rate of the Rachael wild goose chase hovers around 50%. My patience of the Rachael wild goose chase ranges from 0% to 100%, depending on my mood and hunger level. So as we got back into the car and Rachael said to me, "I remember one of Selena's friends lived in Denver in this area, I bet we can find another good place if we just drive around for a while", I was decidedly sceptical. However, without any other better ideas or any energy to fight, I acquiesced.

In a delightfully surprising turn of events, she quickly directed me to the Highland town square and we agreed to park, walk around and eat at the first open, somewhat appealing looking restaurant that we found. We were immediately drawn to a place that was located inside a house and advertised coffee, breakfast sandwiches, and paninis. The place was Cafe Caliente and it was wonderful.

The setting is fantastic, I am a sucker for establishments that are located in houses. Especially coffee shops. I love the warm, inviting feel. It is nice to feel like you can settle down and spend as much time there are you desire. No one is going to rush you through your meal and try to turn the table over for new customers. Very refreshing,

Cafe Caliente is more coffee shop than restaurant, but manages to serve a quality selection of breakfast options. They have a variety of bagel sandwiches and just bagels (obviously), a nice selection of quiches, and paninis. The coffee is completely self serve, you even get to choose your own mug and to say that they have an eclectic assortment is an understatement.

The service was wonderful. The woman who took our order was very cheerful with a charming, slightly crazy tinge. After I ordered my breakfast sandwich, Rachael inquired about the quiche and was informed about the ones on the menu AND a "secret" quiche, not on the menu. When I returned later for my coffee refill, I overheard our server lamenting the fact that her sister thought she was crazy because she liked to talk to her lattes.

I had the breakfast sandwich with egg, cheese,and ham on an everything bagel. It was fabulous. Usually when you get a bagel breakfast sandwich, the bagel is tough and has been toasted all to hell. This results in the contents of you sandwich exploding out of the back end when you take your first bite (Einstein and Panera, I'm looking at you). This was not the case at Cafe Caliente. The sandwich held together nicely and was delicious.

Rachael had the "secret" quiche (with sausage and potato) and enjoyed it tremendously. The quiche crust was made of layers of filo dough, which meant that it was not gigantic and heavy. It was the perfect size.

Cafe Caliente's only problem is their success. There was only one table available for us and it was kind of jammed in a doorway. This would never work with a group bigger than 3 or 4. If that is the only negative though, they've succeeded.

Cafe Caliente is a darling little coffee shop with a surprisingly nice assortment of breakfast food and on this day they might just have saved a marriage.
Posted by Amadeus at 5:26 PM

Between the agreement on tamales and eggs for breakfast and the affinity for the wild goose chase, I feel a certain kinship with Rachael. Makes me feel better knowing there are others out there.
And for a make-at-home breakfast treat: scrambled eggs with avocado and tomato (add the latter after the eggs are cooked). I highly recommend it.

nothing beats a good breakfast to get the day going. =)

A sadly large part of my weekend emotional well-being hinges on a good breakfast.

Every day starts with a breakfast. Do not miss it!:)
Stef
Breakfast At stefanies