Because You Need Another Reason To Hate Corporations 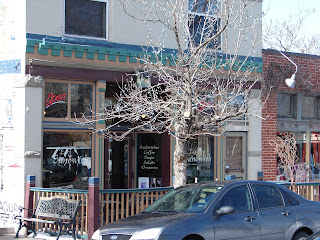 When I was preparing to move out to Denver in June of '07 I did all of my apartment research on craigslist. Risky? Yes, but it paid off. I now live in a delightful apartment in Capitol Hill. I am close enough that I can walk or take the bus to all of the important events that I choose to attend. The only downside is my half an hour commute to the campus in Aurora. I realize that I have no right to complain about a half hour commute. Some people would kill for a commute that short.

I moved to my new apartment in early August. I drove a giant U-Haul down here and was followed in my car by two of my bestest friends, Jorge and Selena. We rolled into Denver around 11:30 pm. Not having the energy to tackle the unloading project at that point, we stashed the truck, brought in the bare essentials and took a walk around the neighborhood. The stated purpose of the walk was to get TP for the morning, but it was also a chance for me to get the feel of my new 'hood (the initial trip to find a place was a whirlwind adventure of which I remember little). I immediately felt at home. On the way back to the apartment from a 7-Eleven (only about 9,000 time better than a Super America, if I never have to answer the question, "Do you have a speedy rewards card?" again it will be too soon), we walked past a place called "The Earl of Sandwich". My first thought was, "God I hope that place is good, because that is the most awesome name for a sandwich place."

Much to my delight, "The Earl" (as Rachael and I affectionately call it) rocks. They make fantastic sandwiches and the service is tremendous. I cannot say enough good things about The Earl. After my third trip there, the server lady had already learned my name (alas, I am terrible with names and have not learned hers, does that make me a dick?) and knew of my love for the club sandwich. Although they violate two of my seven requirements of a club sandwich, I still love them to death. I can't really speak to the quality of any of their other sandwiches, but Rachael has dined there on numerous occasions and she recommends the Marion (wrap of roast beef, sprouts, cucumber, and cream cheese) or the 14th Avenue Delight (pastrami and provolone on rye). They also offer soup and breakfast croissants, which are served all day.

The atmosphere is more homey-coffee shop then sandwich restaurant. They have carpets in some areas and cushy chairs in others. They also have a nice selection of art for sale that turns over at a good clip and never is that really awful restaurant art that makes you think, "Who in their right mind would buy that?" Come on, you know you've said that to yourself when you've been forced to stare at terrible art for an entire meal.

Alas, "The Earl of Sandwich" is no more. It is now called, "Earl's Sandwich Parlor". Why, do you ask, would they change their name from the most awesome name for a sandwich shop in the world, to a merely OK name for a place? One word, my friends. Disney. Apparently, Disney which runs a place in Downtown Disney, has a copyright on the name, "The Earl of Sandwich". Disney has also decided to open franchises in all 50 glorious states. They, of course, sent cease and desist letters to all proprietors who operated places with that name (of which I am sure there were many). Rather than fight the all-powerful Disney, the good people at The Earl just changed their name. I probably shouldn't be surprised and shouldn't be as upset as I am about this minor change. After all, The Earl is still there and serving up sandwiches every day (except Sunday). It's just the principle of the matter. Yet another case of a large corporation flexing it's muscle and getting whatever it wants, screw the little guy. Remember, Disney is where your dreams come true, unless you happen to be a small local restaurant owner who is in our way. In that case we will crush your dreams.

Anyway, please stop by "Earl's Sandwich Parlor". They are really nice and they make fantastic sandwiches. Feel free to refer to them by their rightful name, The Earl of Sandwich. And in the future, if you see a chain version of The Earl of Sandwich pop up in your neighborhood, please spit on their door or something.
Posted by Amadeus at 9:08 PM