A Big Improvement From KFC 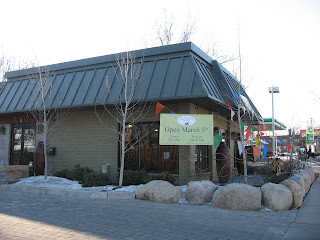 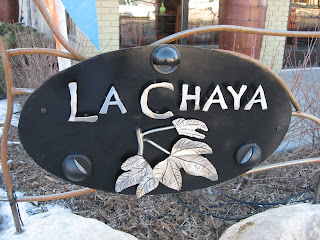 It was a large and boisterous group (due to, I'm sure, my incredible popularity) that knocked on the doors of a newly open restaurant, La Chaya. We even had a special appearance from Jill, Perley's beloved. The website says that they are open for brunch from 9-2 on Saturday and Sunday. We, of course, arrived at 9:00 and 30 seconds. I think they were a little surprised to see a group of eight people arrive, but they adjusted nicely. La Chaya is located in a building that housed a KFC in a previous life. It's safe to say that this is a complete and total upgrade in both quality of food and atmosphere, although that isn't exactly saying a while lot. The owners of La Chaya have done a wonderful job decorating the place. It is very warm and welcoming, with some interesting styling quirks. They certainly have a fondness for metal work. The entryway contains an old door mounted on its side as part of the partition. Perley was both impressed and dismayed (he claims to have had a similar idea for years but had yet to act upon it). 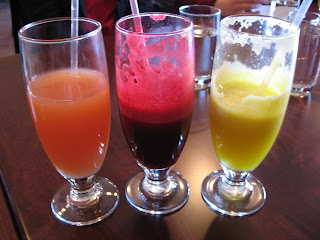 The first thing that you notice about the menu at La Chaya is the assortment of fresh squeezed juices. They not only offer the expected orange juice, but also offer pineapple; carrot & beet; carrot, beet & orange; apple, carrot, celery; orange, banana & pineapple; and carrot, cucumber, beet & lime. Everyone who ordered juice seemed to enjoy them (especially Rachael and her pineapple). I enjoyed the aesthetic appeal of the myriad of juices on the table; it was like the rainbow coalition of juice. Some members of the group were a little put off by the beetiness of a few of the juice options. They're great if you like beets, but don't expect to taste much besides beets.

The brunch menu has some interesting selections, but not exactly wide-ranging. They DO offer a standard American breakfast as part of the brunch menu, which was a pleasant surprise. Our party of eight ordered almost every item on the menu. I think the only items we missed 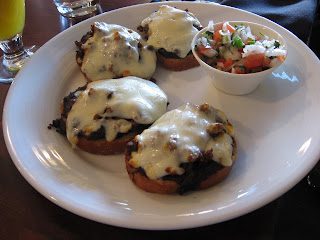 were oatmeal and yogurt and granola. Their offerings have a Mexican flair and everything is done extremely well. I think Fern was a little sad because there was no breakfast burrito option and she had to settle for a quesadilla. Hands down the winner was Rachael's choice of Molletes, which were four pieces of toast covered in refried beans and chorizo and melty cheese with fresh salsa. Her plate was highly coveted by all.

Alas, La Chaya was not perfect. Some members had problems with the service but mostly chalked it up to a combination of inexperience and a large and somewhat demanding group. I ordered the scrambled eggs, but felt a little cheated and think maybe they should have called it scrambled egg, singular. Really small quibbles in the grand scheme of things. These minor issues did not cause the group to rule out a return trip.

The potatoes deserve a paragraph of their own. When I received my plate of food, my heart sank. The potatoes were not the least bit brown or crispy. They looked like your standard disappointing mushy, slightly mealy breakfast potatoes. I was ready to give a failure right then and there. I found the smallest piece and tentatively placed it in my mouth. What a pleasant surprise. The potatoes weren't at all crispy, but they had a wonderful texture nonetheless. They were the exact amount of doneness without being mealy and gross on the inside. The outside was not crispy, but did retain a separate texture from the inside giving it a strange illusion of crispiness. They were also lightly flavored with rosemary and other spices. I didn't even feel the need to request ketchup. In my world that is high praise indeed.

So, on to the official grades. Secret text balloting was used to ensure no vote coercion. We are democratic if nothing else.

Please go to La Chaya and enjoy their delicious food. We fully endorse their fare. God knows the world would be a better place if there were more La Chayas and less KFCs out there.
Posted by Amadeus at 10:33 AM

I feel like giving Jill some bonus points of her own for not being afraid to say "smoking hot chef" while said-chef stood not five feet away - not to mention her husband sitting three chairs away.