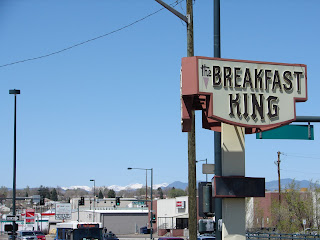 The semester is winding down here in Denver, and by winding down, I mean ramping up with assignments and exams to the degree that I am a man on the verge of a nervous breakdown. Rather than actually deal with the looming due dates, I decided to sign up for a 5k fun run in the morning and then go out for a greasy breakfast. I was able to rope two of my fellow classmates in Operation Procrastination.

Janine, Jess, and I met up at Washington Park for the Strides for Epilepsy 5k to support the Epilepsy Foundation of Colorado on a ridiculously beautiful Colorado morning. We all managed to survive the run. Kind of. I've been in Denver for 8 months now, running 5 times a week, but am still struggling with the lack of oxygen. The first mile went fine, then the wheels came off and I ended up staggering to the finish. Jess put it very well when she stated that she thought her lungs were bleeding and on the verge of collapse during the race.

After the race, we felt as though we deserved a reward. There is no better reward in my opinion than a big greasy breakfast to completely nullify any acquired benefit of running 3.1 miles. Thanks to google maps, we found a relatively close diner called The Breakfast King. When doing my research, I was taken in by the phrase "trucker friendly portions". Who wouldn't be?

The Breakfast King is everything that comes to mind when you imagine a typical greasy spoon diner. They are crowded but also manage to turn customers over at a rapid pace, so no one is left waiting for very long. The decor is very 70's (hint: orange and lots of it). The waitresses are both nice (in a gruff no nonsense sort of way) and efficient. They all have voices that make you think that there may have been years of smoking in their past. It took every fiber of my being to refrain from calling our waitress "Flo". The menu contains all of the standard diner items, including the vastly underrated chicken fried steak.

The food is also exactly what you would expect from a diner. Diners as a whole know how to cook eggs. My over easy eggs were perfect, fully cooked whites with very yolky yolk. My sausage patties were fried perfectly as well. They definitely know their way around a grill. Unfortunately the coffee is what you would expect from a diner, weak Bun-O-Matic Folgers. It's probably unreasonable to expect fair-trade organic schmancy coffee from a diner, so I gave them a pass. Alas, the potatoes were awful. The good people at Breakfast King subscribe to the chopped up narfy school of hash browns (neither shredded hash browns, nor American fried potatoes, somewhere in the middle). This is my least favorite kind of hash browns. They also would have benefited from a longer relationship with the grill. There were isolated bits of crispiness, but were mostly mush.

On to the official grades (methinks my family grades on the harsh side, and I am considering developing some sort of grade equalization system for the Denver reviews):
Beau-Standard American breakfast-C+ (hash brown related)
Janine-Scrambled eggs with cheese and hash browns-B+
Jess-Vegetarian omelet and hash browns-B+

If you are looking for good, traditional diner eats, The Breakfast King is is perfect. Whether or not they are truly breakfast royalty is up for debate.
Posted by Amadeus at 2:08 PM

I found your blog after moving to Minnesota, but I'm originally from Denver. The Breakfast King is King, but it excels from 3am-5am. That's when my fellow bartenders and I would hit it. Give it another try, on a weekday or late at night/early early morning.

You are absolutely right, 3am-5am is in their wheelhouse. We were there at 11am and it was mad crowded. That probably caused them to take the hash browns off the grill before they should have. The King will definitely stay on my list of good Denver places.

The King definitely earned itself a return trip. I don't know about the trout and eggs though. I like to keep fish away from my breakfast food...

All Natural Dijon Mustard can actually have a profound effect on metabolism, even at rest, as well as improving overall digestion and nutrient utiliization.

And if that wasn't enough, other herbs and spices such as ginger, garlic, lemon, cayenne, basil, parsley, and thyme have all been shown to have significant metabolism-boosting properties as they stimulate your taste buds to boot!

Fact is, when you learn how to cook with the right ingredients, you can really begin to enjoy both the fat-burning properties and the ultimate flavor of the foods you use to slim your waist.

And that's exactly what Dave and Karine have put together in the Metabolic Cooking series -- more than 250 mouth-watering, fat-annihilating recipes for you to choose from. And of course, they also have many fat burning salad dressing recipe!