You Picked A Fine Time To Feed Me Lucile 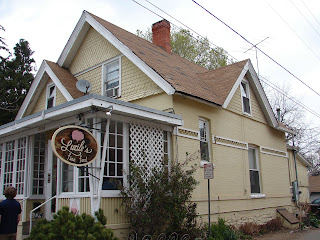 Ask almost anyone in the Denver area about breakfast and the name Lucile's will come up. When I polled some carpool buddies recently and talked about my blog I was greeted with incredulous stares when I said that I hadn't been to Lucile's yet. Once people stop raving about the food, they mention the wait. Waiting at Lucile's seems to be a given and part of the Lucile's experience. Rachael and I decided to brave Lucile's wait on a little day trip to Boulder a few weeks ago. Lucile's lived up to their reputation on all counts.

If you look at the picture on the right, you can predict that loved Lucile's. What is it about restaurants in houses that is so awesome? I don't know, but it is undeniable. House restaurants rock. Period. End of sentence.

Let's talk about the waiting. This is the type of restaurant that would incite a riot under any normal TC breakfast club conditions. Waiting is a given. It will happen. It is part of the Lucile's experience. So much so, that they utilize the second floor as a waiting area with tiny chairs and random collection of books and toys. It is like breakfast purgatory. One of their books consisted of newspaper clippings singing the praises of Lucile's food. Great information that doubled as torture for a hungry individual. With that being said we had to wait about 25 minutes. They turned tables over fairly quickly. A larger group would have been there for a looooooooong time though.

Lucile's is a New Orleans inspired cafe. Given that, we felt it was our civic duty to sample their beignets, in a purely academic endeavor. What arrived was a plate of delicious fried dough with a pile of powdered sugar that more resembled Tony Montana's desk than actual food. It had so much powdered sugar, eating the beignet became risky. If you inhaled ever so slightly as brought your beignet to your mouth, powdered sugar would fly in your mouth, up your nose and maybe even through your eyes causing a severe coughing fit. I swear I was tasting powdered sugar for the rest of the day. Sugar inhalation (as a confessed sugar addict, this was no big deal for me) nonwithstanding the beignets were fantastic.

The rest of the food was fantastic. I had the egg benny, which was great including the six pounds of shaved ham on each English muffin. Great for a meat lover. Rachael had the eggs sardu which was a concoction of poached eggs, Gulf shrimp, creamed spinach, and hollandaise. She gave it high marks, but it was so large she never got a chance to try the homemade biscuit, but it LOOKED good.

The potatoes were as good as non-crispy potatoes can possibly be. That's not saying much, but given the number of people they serve I think crispy potatoes aren't feasible. Too busy, too many people to spend the necessary time to properly crisp the taters. You can't have everything.

Lucile's has some nice touches as well. They have a fantastic homemade jam on every table that was a very nice addition to the beignets. They spice up their ketchup with Cajun offerings. I am normally a ketchup purist, but their spiced ketchup was very good. Lucile's even offers chicory coffee for people that prefer their coffee to taste like ass.

All in all, the meal at Lucile's was great. It was the perfect meal to sustain us for a long day of hiking and sightseeing. If you are in Boulder in the morning, there is no better way to start the day than Lucile's. The grades: