Take These Broken Eggs and Learn to Fry 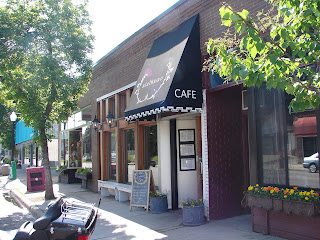 Rachael's job requires her to drive around Minneapolis on an almost daily basis. This allows her to keep a lookout for potential breakfast spots for the club. I personally believe that she keeps a secret list of places to suggest whenever breakfast club is at a loss for a place to go (which is often). Having just returned to Minneapolis for the summer, I specifically requested a new place so I could write a post. There was a lot of discussion and few ideas, so Rachael reached into her secret list and threw out the Blackbird Cafe. The rest of the members were intrigued by the fact that it is conveniently located very close to TCBC headquarters. We had some time as we waited for Fern to report to headquarters, so we called ahead and asked if they had a table for six. After some hemming and hawing, they told us that they would try their best. We greatly appreciated their efforts. They must have done a lot to move around the other three people in the restaurant to give us our table. To be fair, our table of six was situated off in the corner away from all the other diners. Is it possible that our reputation is making the rounds? It's as if they knew we would be a problem table with many special requests and frequent snarky comments and loud (for Minn-E-SO-ta) laughter.

Once we were seated and we waiting for our coffee, the group was polled to describe the decor of the Blackbird. We all looked around and took in the painting of fox hunts, multiple mounted antlers, and Chinese lanterns. Jimmy, in a non-PC moment, knocked it out of the park, "It's designed for the British Sporting Chinaman". While breakfast club does not endorse the use of the word Chinaman, we couldn't resist in this particular instance.

The group wasn't deterred by the strange decor and waited for the food with open minds. Everyone was impressed with their food. Rachael, Judy, and I were the least happy with our food. Rachael thought her omelet was a little small and she did not receive the fruit cup that she ordered (and then was too quite to ask for it later). I was punished for ignoring my own personal decree, "Never order French toast unless you are at Barbette". Judy despite many previous failures, ordered the pancakes. She didn't like that every bite was the same, which is kind of the definition of pancakes. Everyone else had rave reviews for the food and I augmented my own personal meal disappointment with bits of everyone else's meal. My sampling of other people's meals confirmed the quality of those dishes.

Blackbird knows potatoes. They make some of the best French fries in the city. Perfect size and salt level and perfectly crispy. The Blackbird fries are a little bit thicker than the Barbette fries. I personally prefer a thicker fry, but the thick fry is more prone to mushiness. They avoid that at the Blackbird and they are wonderfully crispy. The hash browns were also very good. They had an amazing level of crispness on the outside and were soft on the inside with judicious help of butter to aid in flavor. It remains to be seen if this crispy potato trend would remain if there were more people in the restaurant. There seems to be an inverse relationship between the crispiness of the potatoes and pending orders in the restaurant.

The Blackbird receives a full endorsement from the breakfast club. Even the members that were disappointed with their meals were happy. We felt as though it was due to poor ordering more than poor food. Does that make sense? Probably not. Please go to the Blackbird, enjoy their food and feel free to comment on your own analysis of their decor.
Posted by Amadeus at 10:42 AM

Best blog title, yet. Also, tell Judy not to get pancakes. Waste of an order.

Hey, Just wanted to say I love your blog!
I am a fellow Twin Cities diner with a restaurant blog. I just found your site and linked to it from mine, thought maybe you'd do the same for me??
http://www.twincitiesrestaurantblog.com

Kristi,
Of course! Thank you for the linkage. Now I have to go find out where you like to eat...

Beau - your use of Chinaman is currently making me giggle all by myself in my house. Although, I have been known to throw around the word Chinababy with surprising abandon.
I wanted to report that I have found a delicious breakfast spot up in the Highlands area that you will have to check out when you are back in town. Complete with middle-aged waitresses that use "hon" with every sentence, lunch counter style seating and colorful locals including a "Oddball Tom."

I thought you might be amused by that. Looking forward to breakfast in Denver. Rachael and I will be back in town on August 17th. Can't wait to try your new spot.