A Tale of Two Stags 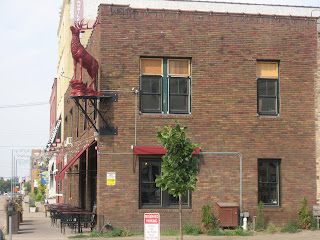 We had to leave soon after the first baskets had been hauled back up to bridge-level filled with writhing silver fish. I was a sensitive child with a vivid imagination and my dad had just told me about people biting the heads of the fish and squeezing out the guts. At age 8 I didn’t know what a smelt was. “An anchovy is like a smelt that lives in the ocean.” “A smelt is something like a sardine or a mackerel.” Oh, one of those fish in the can with a key that my dad sometimes put in his lunch box. These could also be some of the reasons that I’ve never actually eaten smelt- I loved being able to open a can with a key, but hated the oily tomato sauce slathered on the sardines. Then there is that terrible tickle of tiny bones and slippery fish skin in your mouth, another bad feature. And have you ever noticed that the smaller the fish the more pungent the smell? Any of those reasons including the description of how smelt are cleaned once the schnapps bottle has made the rounds a few times are enough to put me off. I witnessed a smelt run once. I had been fishing all afternoon with my father on what was probably was the very first warm spring day. We had been alone all afternoon, but at dusk the bridge suddenly swarmed with cars. The smelt run was on and it was a complete frenzy. There was a crush of people on the bridge, so many that I kept losing track of my dad among the crowd. Headlights were trained on small groups of people untangling the ropes on wire baskets. Coolers of ice-cold beer were hauled out and were prepared to be filled with freshly "cleaned" smelt...

Luckily, this kind of talk does nothing to dampen appetites of the Breakfast Club and after Perley heartily recommended the Red Stag’s basket of smelt fries (whole and head-on), conversation veered to the much loved Dyson Air Blade (To call the Dyson a hand dryer is an insult. It is a revolutionary water removal system.) and the effects of urinal design on the phenomenon of splashback (Note to men: Give yourself plenty of room, or a wide stance while at the Red Stag). 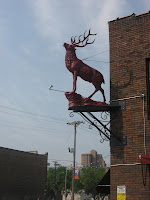 This was the Club’s second trip to Red Stag and a lesson on how the breakfast experience can be totally changed by making either wise or poor menu choices. In an unusual move for an avowed carnivore, Jimmy ordered a simple bowl of berries along with a glass of orange juice (Grade: B+). He may have been gun shy after his previous experience. Lesson Learned: Never order chicken-fried steak if you do not like chicken-fried steak. You cannot make a silk purse out of a sow’s ear.

Judy, the borderline sugar addict, loved the honey-laced whipped cream on her waffles. She even loved the waffles proclaiming them the best waffles she has ever had-except for Jimmy’s (Grade: A). Lesson Learned: None.

Sarah noted a vast improvement in the temperature of her latte, from lukewarm and unacceptable to delightfully molten. Her vegetarian BLT (Grade: B) was greatly improved by the addition of standard-issue bacon and stood head and shoulders above her previous experience. (Another sandwich now removed from the menu due to its lack of flavor.) Lesson Learned: Ask and ye shall receive.

Perley absolutely loved the lobster and egg salad sandwich (Grade: A+). There is a perfect balance between the elements of creamy and eggy and there the Red Stag is not skimpy with the lobster. This visit also saw a great improvement in the field greens department, which had previously been dressed in pure oil. Lesson Learned: Do not text people at 3am because they will get you back by waking you up for breakfast. This lesson was taught by another club member and not by the Red Stag, but is an important one nonetheless.

Beau and Rachael split an order of green eggs and ham and a lobster salad sandwich. The green eggs etc dish was served with sautéed greens that reminded Beau of rotten salad (of which he has dealt with an astounding amount of recently, though not while at breakfast) (Grade: B-lobster sandwich, C-green eggs). Rachael was picturing a dish straight out of Seuss and was mainly disappointed by her still-overactive imagination but also by the crouton masquerading as a muffin. The lobster egg salad was difficult to share since it was so tasty, more due to sharing issues than presentation. (Grade: A-lobster salad, C-green eggs) Lesson Learned-Beau: Negotiating an agreement to share a meal with your wife can sometimes work out in your favor. Lesson Learned-Rachael: The sultanate of Brunei is also known as the Abode of Peace. It is located on the island of Borneo, and odds are Jimmy is right about geography even if you don’t believe him.
Posted by rachael at 12:53 PM 1 comment: