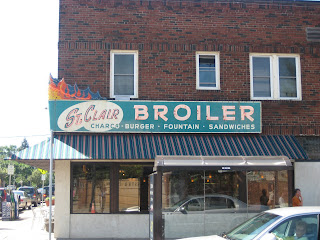 Breakfast club was bursting at the seams this weekend, a full table of eight. Having a large number of members has benefits and costs. Benefits being a large boisterous table and good conversation topics, e.g. the universal hatred of drivers trying to turn left into the Wedge parking lot at 5 in the afternoon on a weekday. Costs being a limited number of options that wouldn't involve an interminable wait and of course, the more people there are, the more vetos that can be wielded. Since this is my last breakfast club before returning to Denver for the beginning of the school year, my only requirement was to choose a place that had not yet been reviewed on this here blog.

This was accomplished far more easily than usual. Rachael, Perley, Jill, and I did all of the heavy lifting as some members of the club took their sweet a$$ time getting to the meeting spot from the dog park, hospital, and their soft and warm beds (yay, fewer vetos!). We assembled a list of three places and as the clock approached 9:30 am, we decided that we could not wait for the full group to make a decision. A call was going to have to be made in order to reserve a table. As Perley, Rachael, and I hemmed and hawed and thought of reasons (because were are too weak from hunger?) why we couldn't make a decision, nor actually call and talk to a human being (because we are teeny babies?), Jill coolly took the bull by the horns and reserved a table at the St. Clair Broiler. Anyone who knows Jill knows that she has yet to meet a bull that she unwilling to take by the horns. Jill wins the breakfast club champion award.

We caravaned over to St. Paul and parked, hoping that during our meal the evil St. Paul city wouldn't stop and put a "no parking" sign on the street and then proceed to issue us tickets. I love many, many things about St. Paul, but I do not love their parking "rules". I think rule #1 of the city of St. Paul is, 1) Find any way, no matter how unscrupulous, to screw people who park in their city. In the past I've parked in what seemed to be a legitimate spot in St. Paul that had a meter, fed the meter for the appropriate time only to find a ticket on my car when I returned. I had failed to notice the sign that nullified the meter during a 4 hour period during that day. I love paying for parking twice, that's awesome. It's as though they don't want people to visit their fair city. I blame Norm Coleman. Or maybe they just want to encourage people to visit the city via the public transit system? One can only hope that they ratchet up their parking enforcement (if that is even possible) come September 1-4, 2008.

The St. Clair Broiler is a neighborhood restaurant with a welcoming atmosphere. They serve standard diner comfort food (the meatloaf is supposed to be very good). It is like a non-chain, non-gross version of Perkins. They make extremely good burgers, fries, malts, etc. that Rachael and I have enjoyed for lunch in the past. Sadly their breakfast is hit and miss, mostly miss. Some of the traditional options were acceptable, but the more daring items were disappointing. Club members who made safe choices were relatively pleased with their meals.

I was not one of those people. I ordered the eggs benny and was not happy. The Hollandaise sauce was very disappointing. It tasted more like yellow gravy. They got the rich salty butter flavor, but they missed on the ever-so-important hint of lemon. It also wasn't as smooth as desired. Alex ordered the Florentine and described the Hollandaise sauce as "grainy". Methinks powder might have been involved in making the sauce.

Jimmy and Perley both ordered the steak and eggs. They were not terribly impressed and considered their meals to be average at best. Jill ordered the most traditional of breakfast but had issues with her sausage, specifically the length of time that it was cooked, or not as the case may be. Judy, Rachael, and Fern all went a more traditional route and gave the highest grades.

The potatoes were terrible. They were previously frozen hash browns, which is the kiss of death of potatoes. Once they are cooked, it is impossible to crisp them properly. Even the few servings that were nicely brown didn't really have a good crisp. Yuck. A lot of the low grades were associated with the potato issues.

On a positive note, those that had OJ or a mimosa route gave high praise to the freshly squeezed juice. Very refreshing and delicious. The toast also receive high marks. Even the positives are a bit of an indictment. When the juice and the toast stand out, it doesn't bode well for the rest of the meal.

The St. Clair Broiler is not a restaurant that we will be returning to for breakfast in the near future (or ever?). Too many disappointments to warrant a return trip. If you go here for a meal you would be better off with lunch or dinner for malts and burgers. I this will be my last MN post for the foreseeable future. Hopefully my compatriots will pick up the slack and I won't be too busy with school to report on the wonders of breakfast in Denver.

Jill was heroic. The hollandaise was grainy. The potatoes were icky. Still, I had a lovely time with the fam. So lovely that I promptly forgot to go volunteer at the library after breakfast. I need a personal assistant. Maybe Jill can do it.

I really enjoy the St Clair Broiler, especially for lunch. They do a great job with burgers and sandwiches. I've heard that they do ribs at dinner, but I've never tried them.

Beau did not take any of my suggestions for the poll

For the record Rachael's suggestions for a domain were of the whackadoo variety. For example, "piscesdejeuner.com".

I agree with your reviews of the St. Clair Broiler.

You should try the Neighborhood Cafe on Selby (near O'Gara's). Excellent breakfasts, very consistant quality.

Thanks for the suggestion! We'll add the Neighborhood Cafe to our list or places to go.