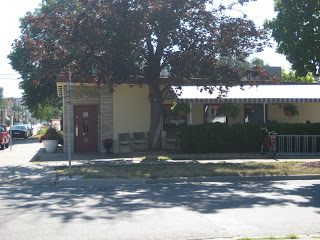 There's a new restaurant in my neighborhood. It used to be Sweet Loraine's, which was so bad that even though it was two blocks away, I couldn't go there, ever. Now it's a new place, with humble signage, called Citizen Cafe. I must preface this review by saying that the Citizen Cafe is so convenient that I gave it three tries before I made any judgments. It's new. It serves local food, and it has a real chef, and more importantly I can walk there. Sweet Loraine's just had factory farmed meat and eggs and a grease pit of some sort.

The first time we went, we noticed right away that Sweet Loraine is no more. From new arts and crafts style furniture to oddly pleasing light fixtures, the place has undergone a transformation. We were, that day, still the youngest people in the joint, but the old-timer diner customers might soon be crowded out by hipsters, because the food is new and different, too. Jimmy had some pate and scallops that he loved. I had a sandwich and the bread was blah. Why a small restaurant would skimp on bread, while at the same time serving up delicious pate and scallops is beyond me. Judy also had problems with the bread, but the waitress was kind (and prompt and efficient), offering her a phone and excessive sympathy because Judy had just left her cell phone and her wallet in the changing room at Midwest Mountaineering. Of course, Jimmy and I had sympathy for Judy, too, but if you know Jude long enough, you know that there will be so many small panics over lost items that it gets harder and harder to get too worried. In short, we didn't let Judy's catastrophe ruin our lunch. Bad bread, on the other hand. Well...

The second time I went, I had breakfast by myself on the most excellent patio. I ordered a fried egg sandwich, which was served on ciabata bread. It arrived, and the bread had been branded with the Citizen logo. I thought this was a good sign. You wouldn't want to brand that crappy bread they offered us the first time. Indeed the bread was better, although it was a little too, um, bready for a fried egg sandwich. Also, the egg was over-easy, so the yolk dripped all over my plate, making my sandwich unnecessarily gooey and sloppy. I thought over-hard was industry standard for fried egg sandwiches. Am I wrong? In the future, I will order it that way. The sandwich came with some sage sausage that was ever so delicious. In fact the few bites with no sausage weren't worth eating, but the bites with sausage were flavorful and hearty. Also, the waitress (different waitress) was especially kind and efficient, which I appreciated since I was eating alone and 20% of one breakfast just doesn't work out to be a very big tip.

Today, I ordered the house-made gravlax, which came with creme fraiche and pumpernickel toast points. My serving of gravlax was generous and absolutely perfect. It was salmony without being fishy. The texture was just right. I had six pieces of this wonderful delight. However, I only had five itsy-bitsy toast points, so I had to eat that last slice on its own, wrapped around a healthy scoop of creme fraiche. There are worse fates, but still, I wonder, with toast being the least expensive portion of my meal, why does bread remain such a problem for the good citizens of Citizen Cafe? Judy got the granola with berries on top. She proclaimed it the best granola she's ever had at a restaurant. I'm a little bit against ordering granola at a restaurant - why go out if only to eat cereal? - but she's a big fan of it, so this is high praise from Judy.

Anyway, A Baker's Wife is just down the street. Maybe someday, Citizen Cafe will get its bread from Gary. If that ever happens, this small neighborhood joint will rival the best restaurants in town. They already have the showier items on the menu down pat. It's bread, quiet unassuming bread, that needs some work. Still, I have to give them an A-. The minus is for the bread, and the A is only partly influenced by the uber-convenient location.


P.S. Only one word in this post has Hungarian derivation. Can you find it?

P.P.S. I've eaten there one more time since writing this post. My new grade is a B. Don't get the corned beef. It's not what you think it's going to be.
Posted by Alex at 9:30 PM

Well I liked the corned beef. If you have ever cured your own meat, you know that the reason corned beef is that pink color is because of nitrates. So the fact that it is beef colored is a good thing. No nitrates = no pink and no carcinogens.

I went there a few times already and didn't have a complaint until I had the sausage and gravy the second time. It was like half the amount of the other time I had it. Maybe they were going thru some sort of biscuit shortage because they were the size of quarters, rather than what I had. Tasty but could have had another whole plate of it. Great coffee, in no way pretentious and everything was cozy. Will try other things next time.

Well, I confess that I like the saltiness of that pink nitrate-y corned beef, but I'm glad Brendan has a place he can get non-cancer meat. So, OK, fine, get the corned beef. It's just not what you - or at least I - expect.

And, hmmph, biscuit shortage. See what I mean? What's in biscuits? Flour, butter and water. They can cure their own corned beef, but they can't throw together some nearly free ingredients to make more biscuits? Crazy.