This Bank Doesn't Need a Bailout 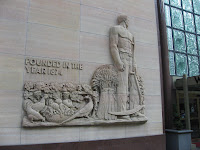 Bank
88 South 6th Street
Minneapolis, MN 55402
612.656.3255
It's becoming more and more difficult for us to find a new restaurant to review on these pages. Beau and Perley did the footwork this morning, littering the browser in the kitchen with a quartet of tabs each open to a different restaurant we haven't reviewed. Then, they washed their hands of deciding which one we would try, leaving that hard work to the rest of the assembled team. After one false start - the Checkered Apron doesn't serve breakfast on weekends 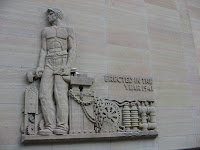 - we decided upon Bank in downtown Minneapolis.
As far as impressive atmosphere goes, Bank certainly beats any place we've eaten in a long time. It's located in an old bank building (where both Jimmy and Judy had childhood savings accounts) with vaulted ceilings, and a real bank vault that has been turned into a wine cellar. The scale of the room makes you feel insignificant, an effect heightened by the dismissive efficiency of our waiter. He seemed to not-hear every request we made this morning, but at the moment we had resigned ourselves to not-receiving whatever we had desired, he would deposit it without fanfare at our elbow. Bank is also in the Westin hotel lobby. I actually really like eating breakfast in hotel restaurants, because you can be surrounded by opulence, and still not feel at all self-conscious about your ratty old dog-walking clothes or your unkempt hair. Other diners appear, freshly tumbled from their hotel sheets, wearing less-than-glamorous apparel, and no one looks out of place even in sweatpants and ratty pony tails. 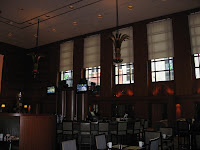 Our cool, but efficient waiter offered us the choice of eating from the buffet or ordering off of the menu. We wouldn't be Breakfast Club if the buffet would satisfy us, but several of our members did stroll by the counter before soundly rejecting the idea of eating eggs off of a warming table. We each ordered from the menu.
Judy got yogurt and fruit. She gave her meal an A-. Her only complaint was a slight mechanical difficulty in removing grapes from the stem after they had been smothered in yogurt. I've said this before, but I really don't know how she grades such a meal. I do know that the presence of melon in her fruit cup will lower her grade, as will any sweetener in the yogurt. If you, too, dislike melon, while enjoying the bitter taste of plain yogurt, then by a 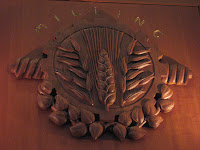 ll means take Judy's yogurt grade to heart.
Jimmy and Perley both ordered the steak (rare) and eggs (over-easy). In our family, we seem to enjoy animal juices with our breakfast. Both were happy with their meals. I can attest to the tastiness of the steak, because I was able to sample one bite from each of them. Jimmy's grade was a B+. He proclaimed it the best meal he's ever had in a former bank. Perley gave it an A, because he couldn't complain about any food on his plate.
Oh! Did I mention that the steak and eggs came with hash browns? If you know our crew at all then you know that we take our potatoes seriously. Ideally they should be fresh, fluffy grated potatoes encased in a not-too-greasy crispy outer shell. Today's hash browns were standouts among the breakfast potatoes we've eaten in the city. We ate them with gusto, and sometimes with a little bit of greed. Who knows when the market will crash, leaving us without such tasty bits of hash-browned perfection?
Rachael, Sarah, and Amadeus all ordered benedict meals. Rachael's came with fish and shrimp cakes, while Sarah's and Beau's were more traditional. Rachael gave hers a B+ and called it 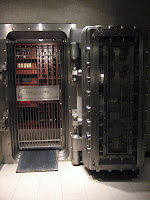 "mass-produced". Sarah's B+ stemmed from a yearning for more Hollandaise. Beau gave his an A-, its perfection only marred by slightly too-cooked yolks.
With all of this happiness around me, I was the only club member not pleased with my food. Because I loved the bites I had of other peoples' potatoes and steak, I am willing to accept that my disappointment came from what I chose to order rather than any fault on Bank's part, and so it was OK that I spoiled my secret-grading ballot by writing in "lizard people". I will, however, quietly request that if you go, you stay away from the smoked salmon, bagel, and cream cheese. I have a no-fish-for-breakfast rule, anyway, which I thought was only proven by its exception for salmon. The new rule may have to be no-fish-for-breakfast-not-even-salmon.
Posted by Alex at 11:25 AM No comments: