Sarah and I live withing walking distance of the original Chatterbox. We love how it feels like a basement from the late seventies or early eighties. We like to get tall Chatterboxes and eat burgers and sit on the narrow patio with our buddies. The Chatterbox is a bar designed for our exact demographic - the Atari generation. You can even play old favorite Atari games while you eat and drink there. It's not unusual to get distracted by crowds of people exactly our age showing off all of those Frogger skills they perfected in basements all over the city when they were small. However, the original Chatterbox has an unfortunate ventilation problem, which even though it has improved over the years, especially in light of the smoking ban, still forces you to leave the 'Box with remnants of it on your clothes and in your hair. No problem. Just take a shower when you get home and have that one outfit you wear to the Chatterbox and wrap it in plastic or dump it in the washer as soon as you possibly can after you get over that tall Chatterbox. 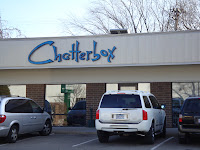 Well, these abatement measures are too much for Rachael, so she's the one who suggested that we try the new Chatterbox at 45th and France this morning. I noticed first that, much like the Chatterbox branch in St. Paul, this place is part of a strip mall. Both of the Chatterbox branches have less basement charm of the original. I hate to sound like a snob (or do I?), but the old garage sale couches and outdated video systems look somewhat ridiculous hooked up to modern flat screen TVs. Like the place in St. Paul, the Linden Hills one is crawling with children. It's not the hip, singles hang-out that our neighborhood place is. So the trade-off: You drive farther to eat surrounded by short people in a strip mall with a much less-authentic rec-room feel, but you don't come home with grease in your hair. Doesn't seem like a fair trade to me, but I may just be loyal to my neighborhood bar, indoor air pollution and all.

As for food, well, I've never loved Chatterbox food all that much. Too bready are their burger buns. Too salty are their fries. Too expensive are their checks. You're paying for the atmosphere more than you are for the food. Case in point, $2.25 for a cup of coffee. Bottomless, but still. It's served in a clear mug (which irritates more than one breakfast club member, but not, strangely, me), and it tastes not nearly good enough to cost almost twice as much as it should. I'm actually happy to pay for the Chatterbox atmosphere, when the Chatterbox atmosphere is people my age playing board games and geekily showing off their outdated video game skills. I'm less happy to pay to watch other people's children eat breakfast or zone out to video games while their parents eat.

Which is not to say that I pay for Breakfast Club outings, but anyway...

So, we had two orders of steak and eggs. ("How is the steak?" "Ehh. OK.") We had two hashes, one chicken and one roast beef. The chicken one looked better than the beef. ("Do you want a box for that [nearly full plate of food]?" "Oh, no that's OK." "Are you done with it?" "Yep.") Sarah had something called cheesy goodness. It arrived looking cheesy and good. Beau and Judy had a couple of sausage breakfast sandwiches served with sweet potato fries. The sweet potato fries were easily the hit of the table. Fingers swooped in for tastes. The fries were crispy and tasted like something you might get at the State Fair. They prompted a discussion: Do you eat them with ketchup? Do you eat them with mustard? Do you eat them on a boat? Do you eat them with a goat?

My favorite part of the meal was my buttermilk biscuit. It was actually all I wanted to eat after a bite or two of hash. I should have just ordered some biscuits and honey. What was I thinking?

OK, onto the grades.

Beau ~ breakfast sandwich with sweet potato fries ~ B ~ He wanted to give it a higher grade, but by the end his stomach felt like it was going to explode. He liked his fries.
Judy ~ same as Beau ~ C ~ She didn't like the sausage. She did, however, have a strawberry mimosa which she enjoyed, but she'd been up all night on call, and if she's not sleeping right now, I'd eat a whole plate of hash.
Rachael ~ chicken hash ~ B- ~ Didn't taste good. Too heavy. She liked the biscuit and Beau's fries. I for one have never seen Beau share fries, so he must kind of like her.
Alex ~ beef hash ~ C+ ~ The fries were good. The biscuit was good. After a bite or two, the hash was not so much what I wanted to eat.
Jimmy ~ steak and eggs ~ C
Sarah ~ Cheesy Goodness Frittata ~ B- ~ Too heavy.
Perley ~ steak and eggs ~ C (with a B+ for the atmosphere because he likes games.)

Perley's line about his meal resonated with more than one of us. He said that his grade went down the more of it he ate. You could argue that a club full of adults should know their own limits. Or you could argue that a restaurant like the Chatterbox needs to lighten up a little bit on the breakfast so we can leave ready to tackle the day instead of wanting to head right back to bed.

P.S. While I am aware that the Linden Hills location is technically in Minneapolis, if you're going to park your SUVs and minivans out front, I'm going to call you Edina. It's only fair.
Posted by Alex at 12:23 PM

P.S. While I am aware that the Linden Hills location is technically in Minneapolis, if you're going to park your SUVs and minivans out front, I'm going to call you Edina. It's only fair.

No this is the line that makes you out as a snob.

That is the sound of a nerve being struck.

I'm with you on the stank of CB1. Not good. But they do make a fine burger so I'll tolerate if it someone else suggests going there.

Considering that the St Paul location was a Perkin's pre-CB, I think they've done an admirable job transforming the place. That said, I was there recently for a blogger meet-up and couldn't get the private room because of a bridge club or blue hairs. No lie. You wouldn't have that happen at CB1.

We lived in Midtown for many years a short walk to the Chatterbox. We only went during fair weather so we could sit outside! Now we live within walking distance of the new Linden Hills location, but haven't checked it out yet. I just assume we will want to sit outside there as well!
From the vegetarian perspective, we were happy that they have a veggieburger and good beer options.

We tried breakfast. Coffee not exactly hot or great, but hash & eggs very good I thought. I don't expect world class Hollandaise at these prices, but only thing I would change. Had a bite of wife's sausage patty, exceptional, so good it was practically like dessert.

We're going to try them again later this year.

From the vegetarian perspective, we were happy that they have a veggieburger and good beer options. Living in Edina