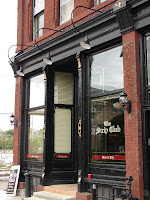 Breakfast club has been on an extended hiatus due to major life changes (e.g. graduation, moving, unpacking), minor life complications (day/night/day call schedules), and old fashioned laziness. Hopefully things have settled down so we will resume our blistering pace of 0.5 posts/week.

A long while ago a kind reader suggested that we try The Strip Club in St. Paul and one look at the menu shows why it might appeal to most members of the club. There is a certain appreciation for people who are at the carnivore end of the eating spectrum. "Vegetarians regarded with benevolent amusement" is the statement at the bottom of menu. Perhaps a better disclaimer on the menu would be "We understand if vegetarians put their menu down and run screaming from the restaurant". Their ketchup is made with bacon. 'Nuff said. As breakfast club 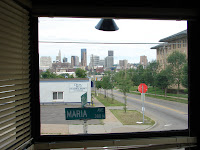 began to assemble, I heard Perley and Jill were merely maybes for breakfast. I sent Perley a text trying to persuade him with the idea of bacon ketchup. Little did I know that he is a ketchup purist and scorned the idea of ketchup modification. Surprise, surprise, a member of the club has a strong feeling regarding something food related. Who knew?

Once everyone had arrived and the meal begun, I was reminded how dearly I missed breakfast club these past two years. My favorite part of club is the often bizarre and sarcastic discussions that we have. Today the conversation ranged from Sarah's new purchase of an ice cream maker, her recent successful endeavors, and the subsequent demands for strange flavors (Gravy! Black pepper! Olive oil!); to rumors of a machine that can allegedly make ice cream out of any food (not a rumor, it's t 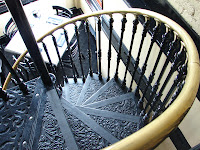 rue!) and its potential limitations, (could it turn a complete turkey dinner into ice cream?); to the likelihood that the Strip Club was a brothel in a previous life (the PTI oddsmakers would give it a ~60% chance); and finally to my freakishly muscular calves and tendency to text like a thirteen year old girl (guilty and guilty).

The food was universally acclaimed. Luckily there is no one who veers toward the vegetarian side of the eating spectrum in this group. Three of us (Amadeus, Rachael, Sarah) had the Loaded burger with a fried egg that would have satisfied Homer Simpson (Good Morning Burger anyone?). This delicious monstrosity was loaded with smoked provolone, sauteed mushrooms, tomatoes, ridiculously thick bacon, and not one, but two fried eggs. I could barely fit it into my mouth and by the time that I was done I felt like I had been dipped in grease up to my elbows. And yes, that is a good thing. It also came with French fries that were absolutely perfect. Possibly the best fries in the Twin Cities. The only downside to the Loaded burger is that when one has not prepared in advance, e.g. starve yourself all day prior to your meal, it is a lot to take. I was getting the full-on meat sweats by the time I had finished my burger. I felt like I should have gotten some sort of medal for finishing it.

Perley and Alex had the Irish breakfast and loved it. The white beans in tomato sauce was given especially high marks. Jimmy had the steak and eggs (with french fries and bacon ketchup). He loved his meal and horded his bacon ketchup like it was the elixir of life. Jill had the smoked salmon and potato hash and enjoyed it, but would have enjoyed it more with a little less salt. Judy went the sweet route and got French toast with caramel sauce. She like her meal the least of the entire group and spent most of the meal trying to snag bites of other people's food. The French toast was too soggy and the caramel sauce got to be a bit too much by the end of the meal. I had the luxury of sitting next to her and sampling the caramel sauce by way of a bit of my bacon and that was an amazing combination. Sweet and salty it's the best.

The service was prompt, witty, understanding of our quirks. Brunch begins at 9 am on Sunday so we had the luxury of dedicated service when we showed up at 9:00:00.1. Coffee refills were fast and furious and we were never wanting for cream or sugar. Our server was also very helpful with menu suggestions.

The Strip Club provided us with a wonderful meal in a beautiful space with a great view of downtown St. Paul. We loved our entire breakfast experience and will return to the Strip Club again. We don't recommend the Strip Club for your everyday breakfast needs, but if you are looking for an insane, delicious, meat-sweat inducing meal for a special occasion, the Strip Club is your place.