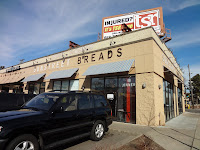 Hey there. How has everyone been? Did we miss anything? Don't get your hopes up. We might be back and regular breakfast club posts will make their triumphant return. I might write this post and then go back in to hiding for two more years. I've heard it both ways. We promise nothing. The good thing about taking a couple of years off of writing about breakfast is that it means there are approximately 9,000 new places to choose from. At least we won't be able to use the, "Geez, there no more places to review in the Twin Cities" excuse. That was a piss-poor excuse given the places that we didn't review in our previous life. Details. Since I am just dipping my toes in the blogging water I thought it'd be smart to convene a small group for breakfast. It was only four of us that arrived at Sun Street Breads on Saturday morning.

It's a good thing it was only four of us though, Sun Street is a pretty small place with only one table large enough to accommodate the full club. It's been around long enough that people showing up looking to smell the new restaurant smell may have dwindled but the crowds remain due to their quality fare as witnessed by their very good reviews. Add us to the chorus.


There were very few complaints about Sun Street. My only problem was the counter service. I was forced to (gasp!) get up out of my chair to get my coffee refill. The order at the counter, then find a table to sit could easily devolve into a lord of the flies situation if the line got big enough. My own personal anxiety increased as Rachael and I waited in the vestibule for the breakfast club treasurers to arrive so we could order. As each group waltzed in ahead of us I thought to myself, "There goes another four-top table". I may have anxiety problems though.


The space is quite nice as well. Even though the seating area is small, the tables don't feel cramped. The bakery is open and visible from the seating area. I may be am weird, I find it mesmerizing watching someone knead bread. Hopefully I didn't make it too creepy for the baker.


The food grades are below but TCBCB gives Sun Street our seal of approval.


Grades:
Amadeus-Standard breakfast with sourdough toast and sausage with a side of potato gordos. Perfectly cooked eggs, delicious toast, and incredible sausage. The only miss was the gordos, which are deep-fried mashed potato balls. Gimme plain old hash browns or fried potatoes any day. A-.


Rachael-Biscuit sammich, with over easy egg, sausage, and Jarlsberg. Delicious, and pleasantly ungreasy. The only downgrade is due to the gordos. A-.


James-Standard breakfast with sourdough toast and sausage. B.


Judy-Standard breakfast with wheat toast and bacon. Also not a fan of the gordos. A-.

Warning! The story below has nothing to do with breakfast.


Last month Rachael, Sarah, and I took a three week vacation to Southeast Asia to visit friends living in Kuala Lumpur. We spent time in Malaysia, Thailand, Cambodia, and Vietnam. It was the perfect vacation. I figured the best way to document our time is to tell a story from our vacation at the end of each post that I write here (starting a whole nother blog dedicated to our travels was far too much work). Those of you bored by travelogues can stop reading right now.

Our first destination on our vacation was Krabi, Thailand. We spent four days there recovering from our journey to the other side of the world by lounging in the pool of our rented villa. After three days of doing almost nothing, we decided that since we were actually by the sea, we should probably at least see it. We signed up for a sunset BBQ snorkel cruise so we could get out and explore the islands of the Andaman Sea. Once we got on the boat and had the briefing we discovered that Kon-Tiki is a Swedish group catering to Swedish travelers. We knew at that at the very least everything would be very safe. As we departed we also learned it would mean that everyone else would smoke approximately eleventy billion cigarettes over the course of the trip.


The snorkel part of the trip turned out to be a bit of a disappointment. Once we got in the water at Bamboo Island it was discovered that the current was much stronger than anticipated. Everyone ended up getting swept away from the reef. The positive side is that rather than have us fight our way back to the boat against the current, they towed us back to the boat with the dinghy using a rope that they dropped in the water. This allowed me to pretend that I was James Bond sneaking on to a super villains luxury yacht.  I'm lucky I am easily entertained.


They fed us some Farang BBQ on our way back from the island. The food was not at all memorable (especially after days of gorging on real Thai food). An incident with one of the staffers was way more memorable than anything else that day.


All of the staff members were young multi-lingual Swedish transplants and uniformly nice. But was one a little too nice?


Fast forward to the middle of dinner. After standing off to the side pretending not be watching us, one of the young female staffers walked very determinedly up to me and said what sounded like, "Faherdie derdie lerdie do?"


Once I realized she was asking me a question, I replied with, "I'm sorry I don't understand..." and before I could finish she dropped her head, turned around, and walked away. My only conclusion based on her reaction is that she was clearly propositioning me. She strategically avoided me for the rest of the cruise so I never got a chance to clarify. Rachael remains unconvinced of my conclusion. Nevertheless, every time we talk about that cruise it allows me to remind Rachael it was the time I got hit on by a Swedish girl. Now that's a once in a lifetime opportunity.
Posted by Amadeus at 2:03 PM 2 comments: