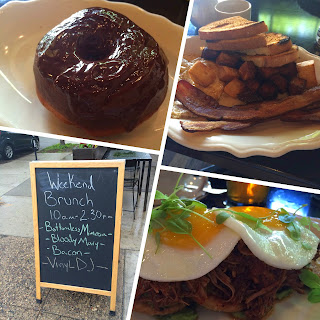 I am not a morning person. There, I said it. So when Perley suggested Nightingale at 9:30, my first two thoughts were "that sounds tasty" and "that sounds early." But, as Nightingale is only five blocks from my apartment, I acquiesced and told him that Maria and I would see him at 9:30.

I was right that 9:30 was early (I was also right that it was tasty, but I'll get to that later). My favorite part of brunch is the "unch" element. There is something luxurious about sleeping in and not eating until it's almost lunchtime. Also, it is totally acceptable to order coffee AND beer at brunch. Luxury and beer aside, 9:30 was also early in that Nightingale didn't open until 10.

After some coffee and tea at Common Roots Cafe we ventured back across the street just as Nightingale opened. Somehow, we were not the first group in the door. Still, between the doors just opening and our manageable group size (half the size of my initial breakfast with the group) we were seated right away. Perhaps Perley is onto something with this early morning breakfast thing.

Nightingale is kind of fancy. This is not, and would never be confused with, a diner. A donut with chocolate ganache made to order? Yes please! Artisan sugar cubes for your coffee? Of course! I'm not an animal! But there are certain times when fancy will not do — corned beef hash and biscuits and gravy. Much like Sarah and her breakfast burrito (which I have yet to see her actually order), I am sucker for corned beef hash and biscuits and gravy. Unless someone has tried to fancy it up. Yams and caramelized onions in my hash? Never! Mushroom gravy instead of sausage? I think not! Thus, my two go-to breakfasts were off the list of choices for me. And for that, I am thankful!

Brian: Smoked pork with masa cakes, guajillo sauce, avocado, and sunny side up eggs. I have never used the word "sexy" to describe a breakfast before, but this breakfast was sexy! I have heard it said that we eat first with our eyes. That is certainly the case with this dish. Perfectly cooked eggs atop a generous portion of smoked pork, crispy masa cakes, and avocado slices. I'll be honest, I had forgotten about the avocados when the meal arrived. A pleasant surprise to discover them on my first forkful. An amazing combination of textures and tastes in this dish. I would order this again and again. Service and atmosphere were great. The old man in the corner spinning records was a nice touch (not annoying like I had assumed it would be). The only reason I'm not giving this a straight A is because they didn't have Furious on tap. Waitress was kind enough to make a recommendation suitable for a hop head such as myself. A very strong A-

Maria: The Classic - eggs, bacon, toast and a side of fruit. Perfect service — I never had an empty cup. Eggs ordered over medium — no complaints. I am normally not a fan of bacon (don't get me started on the whole bacon craze. We get it! You're salty and you have fat — get over yourself bacon) but I ate the [expletive deleted] out of the bacon. Toast was ok — but burnt. I felt like it was my fault for asking for it dry, but I was told it wasn't and I didn't deserve burnt toast. Service more than made up for burnt toast. A-

Sarah: Lamb bacon BLT with breakfast potatoes. Server excellent. Mimosas excellent. Lamb flavor came through, which was nice, but the toast was a little hard. Sweet potatoes in the breakfast potatoes was a disappointment for me, just because I don't like them. General crispiness of potatoes lacking. Nice atmosphere, though. B-

Perley: Mimosa: A+ — perfect OJ to bubbles ratio. Haven't had a better version. The Classic: C — full letter grade reduction for the potato situation. Do not put yams in my potatoes without telling me. Also, no crispness AT ALL. Boooo potato situation. Overall: good, friendly service means it's worth coming back to not order the potatoes. B+

The Donut (split three ways): The allure of a made to order donut was too much for Perley. He, Sarah, and I split this as an appetizer. The reviews were mixed, but mostly positive. Perley and I liked the slight bitterness of the ganache. Sarah thought it could use just a touch more sugar. Perley thought the donut was a tad bit cakey, but still a tasty treat.